Overwhelming. That’s how short students define their first impression of the Netherlands. The average height of a Dutch man is 1.82 metres, while women are 1.68 on average. That makes for some funny situations, like using children’s bikes or getting elbowed in the face at parties.

“In the first few months, my idea of what a tall person is just got completely skewed. A tall person back home is short here. Back home, I’m a lot closer to average. Two of my Dutch friends here are two metres tall”, recollects Senan Cullinane, a 21-year old UCU student who grew up in the Northwest of Ireland. The average height of an Irish man is 1.78 metres, Senan is 1.73.

Jasmine Bridget Coelho (21), also a student of Liberal Arts and Sciences, comes from Kenya, where most people “are nowhere near as tall” as the Dutch. “It was kinda crazy to see how tall women are here because in Kenya women are relatively short”. With 1.56 metres, Jasmine is just a few centimetres shorter than the average for her country: 1.59 metres.

But apart from the initial shock, how does their height affect their day-to-day lives? They’re all quick to mention the supermarket. “I was doing my groceries the other day and there was a specific carton of milk I really wanted, but it was too far back. I tried to get it by poking my fingers in through the grates underneath the shelves and pushing it forward”, says Psychology student and DUB blogger Rafaella Karadsheh, who’s 1.59 metres tall and grew up between the United States and Jordan. A Dutch woman eventually came and helped her.

But that doesn’t always happen. “When you come here and don’t speak any Dutch, it’s really hard and intimidating to turn around to the person next to you and ask ‘could you reach this down for me, please?’ I felt super uncomfortable approaching people in another language”, says Niamh Sibley (20), a 1.62-metre UCU student from Sheffield, England, who’s half Irish.

“There are some tricks. This friend of mine would get a piece of cheese that would already be in her basket and slide it through the grate so she could pull things from the top shelf towards her. But I have other friends who have actually managed to collapse the shelf by trying to reach up and grab things. I’ve dropped a pint of milk once, which was quite embarrassing”, Niamh remembers.

Now in the second year of her studies, Niamh isn’t so intimidated to ask for help anymore, but she’s since then adopted a surefire strategy to get everything she wants at the supermarket: doing her groceries with a tall friend. Rafaella does the same thing: “I try to have a tall friend around me the entire time”, she says with a laugh. “I’ve also learned how to convince people to do things for me. Because I had to learn to ask for help when I cannot reach stuff, I am now much more comfortable to ask people for favours”.

Those favours include grabbing items from the top shelf in the kitchen. Rafaella sometimes even takes to the group chat to ask for help in that regard. Anticipating this problem, Niamh made sure to be the first one to put her stuff in the kitchen when she moved to her student house, which accommodates 12 other people. “I went to the kitchen earlier just so I could put all my stuff in the bottom shelf”. But her roommates help her out, too: “My flatmates have learned to leave the spices I use in the front of the fridge, because if they’re at the back, I have to stand on a chair to try and reach them”.

Speaking of the kitchen, the UCU students are unanimous in complaining about the microwave. “They place the microwaves in our living space above the fridge, which is extremely high and super annoying”, protests Jasmine. “Sometimes I have to jump to reach it, or ask for assistance from somebody with a longer arm”, adds Senan.

The bathroom is another space where things can get quite challenging. “My tiptoes are getting stronger by the day so I can see myself better in the mirrors placed slightly above me”, jokes Jasmine.

In addition to being the tallest people in the world, the Dutch are also known for their keenness to use bicycles as a means of transportation. That, too, can be a daunting task for short students. “It’s super difficult to find a bike that’s short enough for me to have my feet on the ground without jumping off the seat. My legs aren’t long but I’m not short enough for a tiny bike”, explains Senan. Jasmine has the same problem: “my first bike turned out to be a kids’ bike with one gear and it really hurt my back and knees to ride it”.

Niamh once again anticipated the issue: “I don’t have great balance. I’m not that coordinated in that sense. My dad and I knew that if I was going to be biking around, I wouldn’t be able to do it on a regular Dutch bike that you can find at the bike shop or the market. So, we ended up going to Decathlon to specifically find a bike with a smaller frame. We researched first. My bike is comically small compared to most people’s”. Even so, trying to keep up with her friends when they’re all cycling together isn’t always easy. “I’m lucky because I’ve got gears, but I’ve noticed that my little legs are going a lot faster than those of my Dutch friends who have got bigger bikes”. 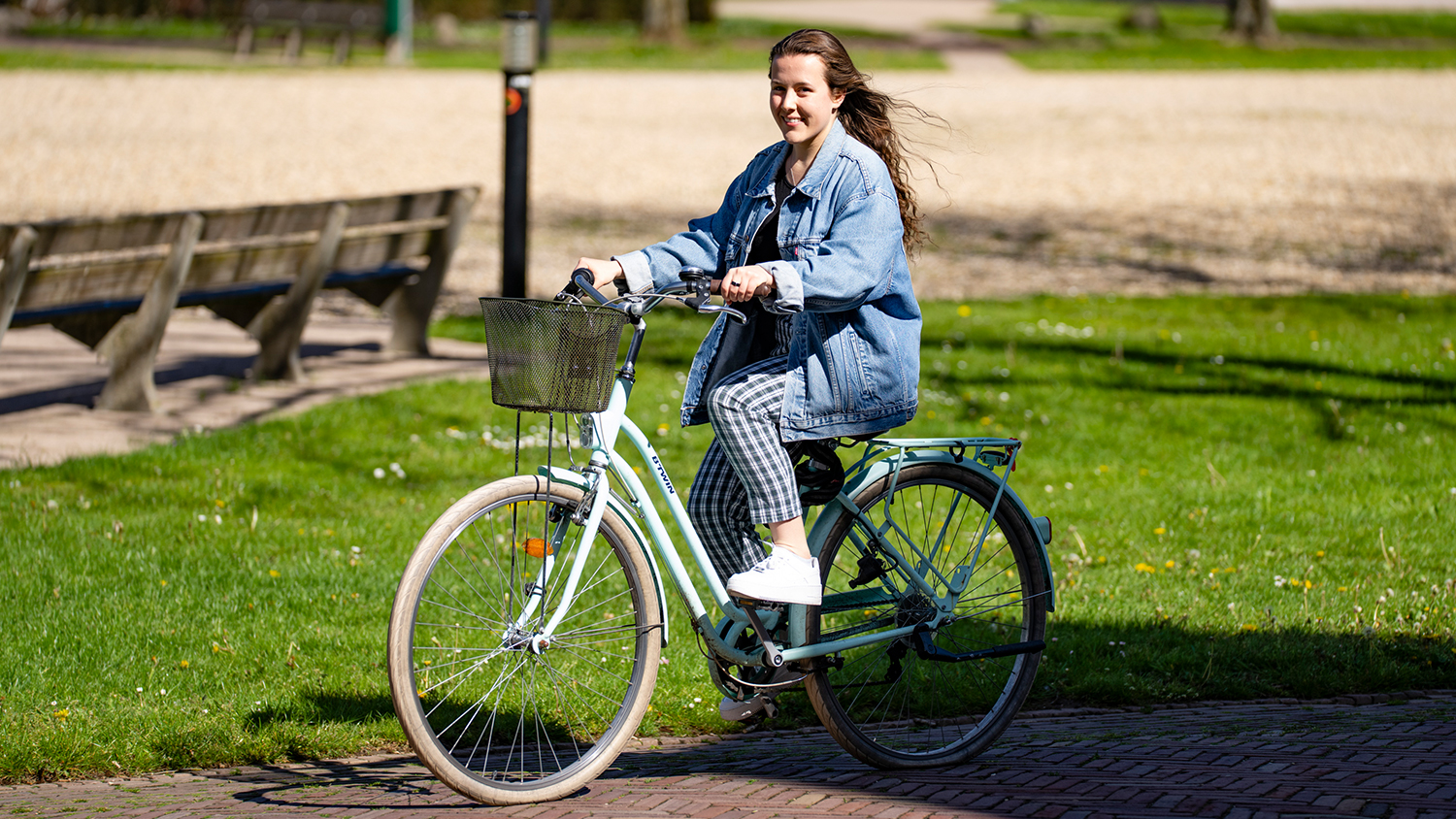 Rafaella doesn’t struggle so much because she uses the bike subscription service Swapfiets. Their lowest setting is barely too big for her, but she’s gotten used to it now that she has been living here for three years. She did embarrass herself once, though, when borrowing a friend’s bike. “I used to volunteer for the UCU bar when it was still open. One day, I had to borrow a friend’s bike to pick up some bottles of wine. She’s around 1.70 metres tall. I tried to get on her bike when I was leaving the supermarket and fell into a bush because I lost my balance”.

But that’s far from being her only party-related embarrassment story. “Two of my Dutch friends threw a joint birthday party, and they invited a lot of friends from the cities where they’re from. So, there were about 30 Dutch people in the room. Because they were so tall, they didn’t realise I was there. I got elbowed in the face a lot when they were dancing”.

“The funniest thing is probably flirting with super tall guys at parties. They have to literally bend down to hear what you’re saying”, Jasmine chuckles.

“I really struggle with bar stools here. I feel like they’re taller than the ones back home. I was in a bar near Oudegracht once, and I had gotten up on one of their bar stools. I had finally managed to jump up, when the group I was with had to move. I tried to get off it, but the back of my skirt got stuck on the seat and my feet couldn’t touch the ground, so I just kind of dangled there and I had to get my friend to help me”, recollects Niamh.

Luckily, as awkward as these situations may have been, the students tell these stories with a smile, confident in their newfound adaptability. “It isn’t so bad”, says Senan. “I’m used to it”, shrugs Rafaella. In fact, they are enjoying their time in the Netherlands so much that they would like to stay. Senan is planning on sharing an apartment in the Hague with a few friends following his graduation, while Rafaella has just been accepted into the Master’s in Social Health and Organisational Psychology. As for Niamh, she is definitely considering a Master’s degree here, although Sweden is equally high on her list. Jasmine is also looking to pursue a Master’s somewhere else in Europe, which means she is likely to continue living in a country where most people are taller than her.

Why are the Dutch so tall?
The Netherlands is now the tallest nation on Earth, but things haven’t always been this way: a review of military records for a study published by the Royal Society of London revealed that, in the mid-1800s, Dutch military men were 1.65 metres tall on average, which put the Netherlands among the shortest countries in the world. So, what has made them shoot up over 20 centimetres in just a bit under two centuries?

Since the change has happened so fast, it cannot be attributed to genetic factors, so Dutch people’s height is generally attributed to welfare factors such as access to sufficient and healthy food, especially dairy (the country’s specialty), which guarantees a good supply of calcium to their bones. The quality of their healthcare system is also believed to play a role.